Meet our new Sew News Sew Along pattern: the Palmer Pullover! You are going to love this customizable pullover design; there are so many built-in options to make it your own or customize it for someone else. Make your pullover unique with optional color blocking (perfect for scrap busting), a collar or hood option and an optional cozy kangaroo pocket to recreate a classic hoody vibe. Sizing is available in S-4XL with a unisex design, meaning this pattern has lots of wardrobe and gifting potential!

Featured in the latest issue of Sew News, you can grab the pattern free now as part of our limited-time free sew-along. You’ll also get a step-by-step tutorial featuring yours truly. After making the magazine samples and preparing for this video tutorial, I have spent a lot of quality time with this pattern. But there are still yet more variations I want to make, including at least one for a gift!

Here’s a look at the versions I’ve made so far.

First, let me tell you about the Palmer Pullover versions I created for the magazine. I sewed size medium using a lovely heather bamboo French terry from Mood Fabric in Almond. The fabric is light- to mediumweight, which creates a nice light yet sporty layer. Because this fabric has a good percentage of cotton, it pressed well and was generally very easy to sew with for this project, even for the more fiddly areas, like the zipper and the collar.

For my first version, I created the color-blocked version with a hood. I subbed in some scraps of mauve French terry from my scrap that were very similar in weight and drape to the natural French terry.

For the second version, I created a solid pullover with a collar with a bright metallic gold zipper. I was truly surprised by how upscale this version turned out!

For the version I made for the sew along, I used two fabrics from my stash to create a color-blocked hooded version in size large.

The black fabric with white dots is a deadstock fleece-backed sweatshirt fabric (originally an American Apparel fabric, I believe). The solid black is a mediumweight French terry from another project; I cut off the long peplum skirt from a sweatshirt dress and used the hemmed edge for my sleeves. I left the bodice solid to make the most of the cozy sweatshirt fabric and only color-blocked the sleeves.

There isn’t much French terry left in my stash, but I am considering making my husband a version for the holidays.

I really love the addition of the drawstring as it gives this pullover a more sporty athleisure vibe. This is perfect for lounging around, meditating, and keeping warm while walking outside — my ideal form of exercise. Plus, the hack was so easy to do!

First, sew the lining and outer hood pieces along the center back curved line and then stitch them right sides together along the opening and flip right side out so the necklines align. Then gather your drawstring and cord stoppers and cut two 1″ square pieces of interfacing.

Separate the hood pieces and fuse the interfacing squares right next to the hood opening seams on the inside of the outer hood. At this point, you can also install a buttonhole or eyelet if your fabric easily ravels. In my fleece, I simply cut a tiny hole just big enough for the drawstring.

Align the hood pieces back wrong sides together making sure the seam is right along the opening. Topstitch around the hood opening at 1″ from the seam.

Attach the hood to the neckline of the pullover sandwiching in between the facing and body.

Cut a tiny hole on just the outer hood in the casing channel where the interfacing is and attach a safety pin to one end of the drawstring. Thread the drawstring through the casing until you reach the other side and even out the drawstring ends. Attach the cord stoppers.

This style is also unisex! As soon as my husband came home and saw me in this hoodie he wanted an identical one, and lucky for me I have just enough fleece and a lot of different drawstring options.

I hope you consider joining the Palmer Pullover Sew-Along! The pullover truly comes together quickly if you’re looking for a gift to make, but it would also make a nice sew for yourself during holiday week. As you can see, it’s easy to customize for whoever is lucky enough to receive one. 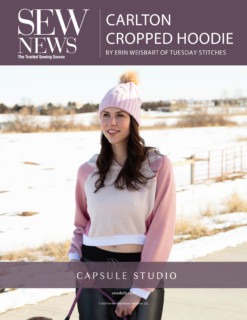 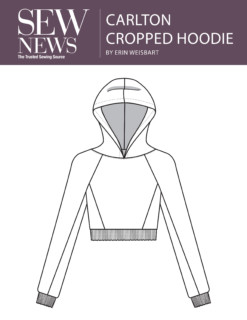 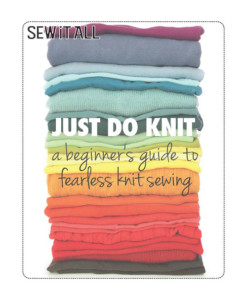 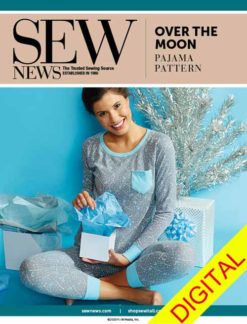